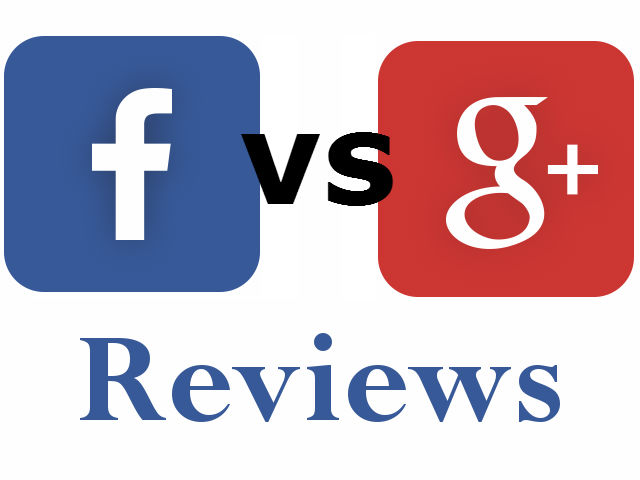 Which social media giant is more important for you to have reviews on: Google+ or Facebook? First, let's check out the raw numbers.

Google+ is not as big as Facebook overall. Facebook has almost 1.3 billion active monthly users as of 2014, while Google+ has around 540 million. Seventy-two percent of adults online stop in at Facebook at least once every month. For Google+, 22 percent of online adults visit once per month.

Google jumped in to the world of reviews when they started Google+ Local in 2012. Google+ reviews are important because they appear in 83 percent of local Google searches. Google Maps is the top maps app for both the iPhone and Android smartphones.

In addition, Google has tweaked their algorithm to heavily consider social signals to determine ranking order. When your clients post great reviews of your clinic around the web, Google's search engine takes note of the main keywords and gives you a little more ranking power.

Here is an example of Google using their search dominance to tailor results for web searchers: Google Local Carousel is a new feature rolled out by the company late last year. It places a scrollable "carousel" of relevant businesses beneath Google Maps. Consumers can quickly flip through results and choose an appealing business from the thumbnail photos. The information is drawn from Google+ pages and related data, another reason to have your contact information and business promotional photos up to date and current.

Perhaps the biggest plus in Facebook's favor is they have mastered mobile. Of their 1.3 billion monthly active users, 399 million are mobile-only. In fact, Facebook has 60.3 percent of all social mobile sharing.

Reviews are inherently social, and with Facebook right on their smartphones, your clients can review your physiotherapy clinic while they are there. And it may not be a full formal review--perhaps only a quick status update about the speed of service at your clinic or how they were treated by your staff.

One drawback to Facebook is that the vast majority of data is kept within Facebook. Status updates are not easily searched from Google or Bing, and users within Facebook have to use the search box to find information.

Facebook is working hard to overcome these limitations and make their data more accessible. For example, they initiated a feature for mobile users called Facebook Local Search which provides business data as well as reviews from friends.

Reviews are like word of mouth on rocket fuel. Before the Internet, you relied on the good word of your friend and family, and maybe a Consumer Reports issue to know what the good companies were.

Sure, you still tell your friends in person about a cool a new restaurant, but when you share it online, you reach many more people. SearchEngineLand.com reports that 72 percent of consumers place as much trust in online reviews as from their acquaintances.

No matter where you get positive reviews, perhaps Yahoo Local or maybe a health-related site, amplify that good news by creating a post on your Facebook and Google+ pages and linking to the review. Share good news whenever you get it. This also helps build social proof that your clinic is in demand by people looking for your expertise and authority.

Why Are Online Reviews Important?

You need positive reviews mainly because people are actively searching for reviews online. And they rely on social media to provide reviews. According to Vocus, 68 percent of consumers log on to their favorite social networking sites to read product reviews.

In the end, it's clear you need both Facebook and Google+. Facebook dominates the social media space. Google is the king of local search and maps, a major advantage.

Which one is more important depends on your business and where your patients hang out online. Smart physiotherapy clinics will have a presence on both. We can help you plan a social media strategy that will take advantage of these important social media monsters.

Thank you for signing up.
You have been added to our newsletter list.
Submit
Request an Appointment
Close x

Your message was successfully sent. Thank you for your time.